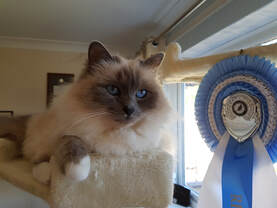 We would like to thank all of Jess's judges to date in helping her to achieve her current titles and we hope for her to continue showing after the Covid-19 restrictions are lifters and shows recommence. 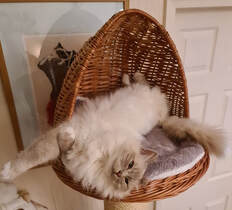 IGMC Olly Purrs
Olly started showing in the HHP section as he has one gauntlet that is too short for the pedigree section. But with his temperament, he is (in my mind) ideal for this section and gains all his knowledge from his uncle Barney. He will be shown in both GCCF and TICA and we will display his results and titles as they are achieved.
As a kitten he had a couple of 2nds initially but finished it off with a Best In Show Win at the Herts and Midds show in Feb 2017 before starting his show career as a neutered adult, a fab ending to his kitten showing in GCCF. Olly also finished 10th Best HHP Kitten for EW region in Tica after attending only a couple of shows. 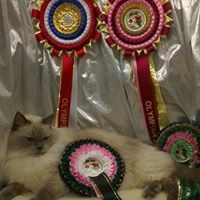 GCCF Supreme UK OGIGMC & Tica RW SGM Barney Rubbles
We would like to thank all his judges to help us achieve his final title of GCCF Supreme UK Olympian Gold Imperial Grand Master Cat and TICA RW SGM. Barney has made so many new friends and followers (human and furry) during his show career from when he attended his first show on the 25th February 2012 - Coventry and Leicester Cat Club
We have only listed the certificates that counted towards his titles but he received many more towards his Olympian titles but as these were breed shows and unfortunately not all of them count but we send huge thanks to all of his judges.
He has also achieved numerous Best in Show results during his time on the show bench. He is now in full retirement from showing and being on exhibition and wishes everyone show many sucesses. 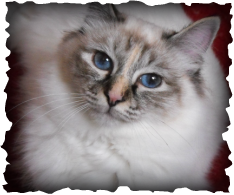 We would like to thank all of Babooshka's judges in helping to achieve her Grand Champion title. Babs has gained her Imperial title and continued to show as a neuter but has now retired from the show bench.

Danby retired from our breeding program in Nov 2020 and now enjoys being a relaxed neuter. He still prefers to live in his stud pen and loves sleeping outside in his bed day and night. Danby is Sire to Jess and Olly as well as many other kittens during his time as a stud cat.