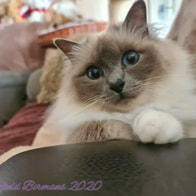 Jess is litter sister to Olly Purrs, both of which were from Willow's last litter before retiring her from out breeding program. Jess was born in June 2016 and achieved her Grand Champion title before the safe arrival of her first litter. After complications during the delivery of her second litter then decision was made to retire her from breeding and concentrate on her show career. Jess has gone on to gain her Grand Premier title along with many best of breeds and best in show section 2 neuter before Covid-19 and all shows had to stop. We look forward to her attending more shows in the future

​​Please see her successes on our Show Scene page 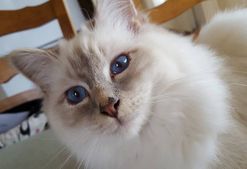 Olly was ever so poorly following from his first course of vaccinations and it was doubtful that he was to survive. With lots of love and care, he pulled through and now could never part with him. He has grown into a lovely young cat who is always getting into trouble for one thing or another. He certainly lives up to his name by not only being the Troublemaker but Purrs all the time. He is such a happy cat and is enjoying his new found show career. He constantly gains knowledge from the Master himself, Barney Rubbles and loves all the attention he can get on a show day from judges, stewards and the general public. It is hard to believe that this cat is that same kitten who we nearly lost and now wouldn't be without. He is litter brother to Gr Ch Brofield Forget-Me-Not and they are inseparable. 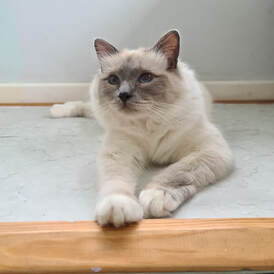 Squeaky had a shaky start with being rejected when he was less than 12 hours old. I took the decision to care for him for the next few days, he had this strange squeaky noise he would make and the name stuck. Once he was gaining weight comfortably, I put him back to mum with his litter brothers and watched him thrive. His markings turned out to be another decision to keep him and show once shows resume. So we are looking forward to seeing how he does in both Tica and GCCF show in the future 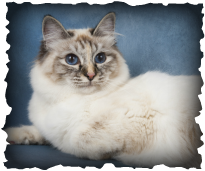 Babs was the only female in Willows first litter and we fell in love with her. Babs is often seen out showing and gained the Champion Certificate in 3 consecutive shows. She then went on to gain the Grand Champion title and now her Imperial title where she has since retired from breeding and will be seen later in 2016 attending shows as a neuter.

Please see her show successes on our Show Scene page 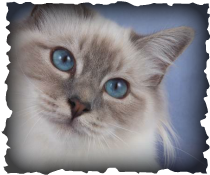 Willow came to live with us in 2009 and was to become our new queen. She gave us our naught tortie girl, Babooshka from her first litter in 2010.

We are grateful to her breeder,Theresa for letting us take her home and into our lives. Willow was mated to Danby and gave birth to a litter of 3 boys and a girl. Willow has now retired from breeding and will now live with us along with our other neuters.
Powered by