Brofield Birmans
Brigg, North Lincolnshire
Just this side of heaven is a place called Rainbow Bridge. When an animal dies that has been especially close to someone here, that pet goes to Rainbow Bridge. There are meadows and hills for all of our special friends so they can run and play together. There is plenty of food, water and sunshine, and our friends are warm and comfortable.
All the animals who had been ill and old are restored to health and vigor. Those who were hurt or maimed are made whole and strong again, just as we remember them in our dreams of days and times gone by. The animals are happy and content, except for one small thing; they each miss someone very special to them, who had to be left behind.
They all run and play together, but the day comes when one suddenly stops and looks into the distance. His bright eyes are intent. His eager body quivers. Suddenly he begins to run from the group, flying over the green grass, his legs carrying him faster and faster.
You have been spotted, and when you and your special friend finally meet, you cling together in joyous reunion, never to be parted again. The happy kisses rain upon your face; your hands again caress the beloved head, and you look once more into the trusting eyes of your pet, so long gone from your life but never absent from your heart.
Then you cross Rainbow Bridge together....
Author unknown... 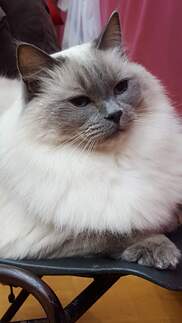 Barney came to live with us in 2005 accompanied by his half brother Darcy. Barney was to be a pet only but when Babooshka took a break from showing we decided to enter him into his first GCCF show in the Household Pet Section and the rest as they say is history.

Barney enjoyed showing and loved all the attention he got from his judges, stewards and admirers. He always had to have a headbutt with his best mate Jon.

Please see his show successes on our Show Scene page.

Barney was awarded SGM (Supreme Grand Master) at Tica shows. At the GCCF Supreme cat show on the 24th October he was awarded the highest title of Supreme UK, a fantastic achievement. 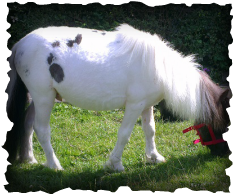 Harry came to live with us in 2013 and settled in well. We had hoped to show Harry but never got the chance . He was such a loveable character, always into mischief. Liked to lend a hand with poo picking, tipping the wheel barrow over or trying to lick you. He left us so suddenly and is missed by us all. 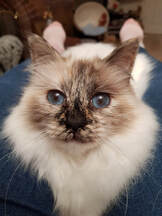 Peggy developed Pyo and as a result, we lost her at a very young age 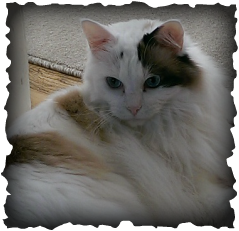 Well a bi-colour of a lot of white and not much seal! Darcy came to live with us with Barney, both boys shared same Sire and at the time couldn't decide which one so brought them both home. Darcy liked nothing more than a lap to sleep on. He was never keen on car journeys and preferred to be a stay at home cat and sit on any lap that was available. He never seemed to be the same cat once Barney left us and we can hope he is back to his old self now he is reunited with Barney.

Gaby became very unwell all of a sudden, and after being hospitalized at the vets and all the tests revealed nothing, she was brought home. But a couple of days later she passed away with us by her side. RIP our sweet angel xx 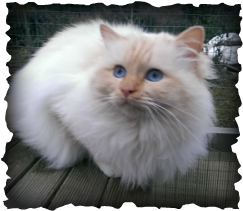 Freddie was at strictly limited stud and was only available to selected queens. He has now been neutered and lives happily with his mum, Krissy 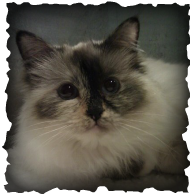 Krissy joined us in 2010 after her breeder/owner sadly passed away. Just when we thought our birman household was complete with a Klassyklogs joining the Klan, she gave us our first stud, Ch Brofield Redadair (Freddie) in 2011.  Krissy has now retired from breeding and may continue to show as a neuter in the future.
Powered by